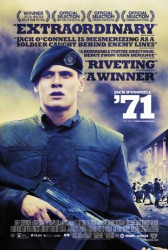 Storyline: A young British soldier is accidentally abandoned by his unit following a terrifying riot on the streets of Belfast in 1971. Unable to tell friend from foe, the raw recruit must survive the night alone and find his way to safety through a disorienting, alien and deadly landscape.