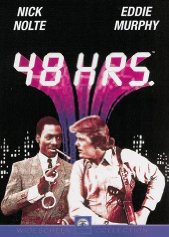 Storyline: Oddball cop and tough guy, Jack Cates is the only survivor of a cop shooting and in hunting down the murderer collects Reggie Hammond from jail for 48 hours. Hammond is oddly motivated to help. The killer is searching for his stash of cash. Cates and Hammond who have the Black-white, cop-crook thing to work out make surprisingly good partners as they navigate through the city looking for their suspect.