EMDB > All Movies > A > A Dark Reflection
Previous Next 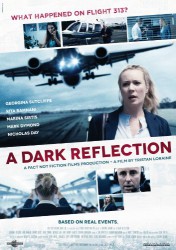 Storyline: The film is based on actual events. World renowned, investigative journalist Helen Eastman returns to the UK after a disastrous assignment in the Middle East and takes a new job at a local paper to be closer to her air traffic controller boyfriend, Joe Forbes. Rather than be happy that she has finally given up her high profile career to be closer to him, he is despondent having been suspended from work following a serious JASP Air in-flight safety incident on his shift. The incident is not released to the public, triggering Helen's instinctive journalistic curiosity to ask. Why not? Helen convinces her new editor Nick Robertson that there must be more to the incident known as Flight 313, then JASP Airlines and the aviation regulators are admitting to. Trainee journalist Natasha Stevens joins Helen to investigate matters further. As they probe the aviation industry for answers, a well-orchestrated pattern of denial emerges and they soon discover they are not the first to ask difficult ...