EMDB > All Movies > I > It's an Adventure, Charlie Brown
Previous Next 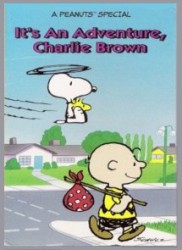 Storyline: In this anthology, we see a series of stories are directly adopted from the Peanuts comic strip. These include Charlie Brown having strange visions and rashes of baseballs and becoming the admired summer camp president known only as "Sack" for the grocery bag he wears as a result. In another tale, Charlie Brown runs away to escape prosecution for literally biting his hated kite eating tree. Also Lucy determined to rid Linus of his security blanket over his protests.