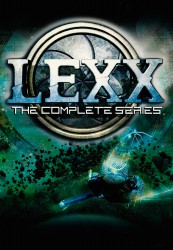 Storyline: I am Kai, last of the Brunnen-G.Millennia ago, the Brunnen-G led humanity to victory in the war against the insect civilization. The Time Prophet predicted that I would be the one to destroy the divine order in the league of the 20,000 planets. Someday that will happen, but not today. Because today is my day of death. The day our story begins.A cowardly security guard, an undead assassin, a female with a body designed for sex and a robot head madly in love with her all make up the crew of the spaceship Lexx, the most powerful weapon in the two universes.