EMDB > All Movies > U > Uninhabited
Previous Next 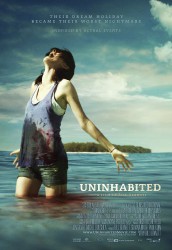 Storyline: Harry and Beth wanted a different kind of holiday. So they chartered a boat to drop them off on a remote coral island on the Great Barrier Reef. Paradise? The island was idyllic, surrounded by a wide reef, covered in palms and full of birds and other wildlife. It was small and totally deserted. Or was it? After snorkelling, making out and having fun, the young lovers soon come to believe that there is someone else on the island. Things go missing from their camp and then they discover someone else's footprints in the sand. At first amused, this becomes disturbing as they realize the island has a ghost! From paradise, the holiday quickly turns into a nightmare of arguments and mistrust... Inspired by actual events.