EMDB > All Movies > U > UHF
Previous Next 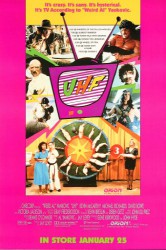 Storyline: George Newman (Yankovic) is a normal man. Problem is, he's also a daydreamer, who can't keep hold of a steady job. His uncle decides George will be the perfect man to manage Channel 62, a station which is losing money and viewers fast. George's imagination is put to good use and he starts thinking up bizarre shows such as "Wheels of Fish" and "Raul's Wild Kingdom". The ratings start to soar again, but not everyone is happy.