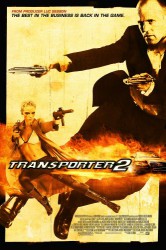 Storyline: Frank Martin is the best in the business. The ex-Special Forces operative hires himself out as a mercenary "transporter" who moves goods--human or otherwise. Very simple, he delivers, no questions asked. Frank has relocated from the French Mediterranean to Miami, Florida, where as a favor to a friend, Frank is driving for the wealthy Billings family. There's very little that can surprise The Transporter, but young Jack Billings has done just that; Frank has unexpectedly bonded with Jack, age 6, who he drives to and from school. But when Jack is kidnapped, Frank must use his battle-tested combat skills to retrieve the boy and thwart the kidnappers' master plan to release a virus that will kill anyone with whom it comes in contact.