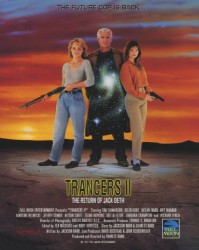 Storyline: It is Los Angeles, 1991. Jack Deth has become accustomed to life with his new wife, Lena, in the six years since they singed Whistler. Hap Ashby, a former pitcher for the California Angels, had gotten his life out of the gutter and made quite a fortune investing, which he uses to finance his collection of fire trucks, among other things. But life is about to become a little more difficult for Jack and the gang. Whistler's brother, E.D. Wardo, has gome back in time and has started a trancer farm under the organization known as GreenWorld. GreenWorld strives to 'clean up the world', but in reality they are kidnapping homeless people and mental patients to become 'tranced'. And they're after Hap, the ancestor of a future Council Member. Jack's quite ready to singe a few trancers, but he isn't expecting his dead wife to show up. Through the power of technology, Alice has been saved from death and sent back to 1991 to help Jack and stop Wardo. The tension mounts as Lena becomes more ...