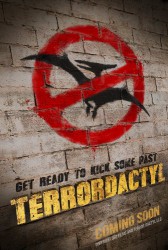 Storyline: When a meteor shower rains down outside Los Angeles, Lars and Jonas, two friends stuck in tired, boring lives, head out to find one and strike it rich. After recovering one, they start being stalked by Terrordactyls, ancient flying reptiles, that launch a full-on assault on the city. They go on the run, trying to survive, where the unlikely heroes, along with Candice, a tough-and-sexy bartender, Valerie, her sultry roommate, and Sampson, a constantly drunk and sassy ex-marine, soon discover that there's more to the meteor than meets the eye. They must learn to put their differences aside, and fight back to make the Terrordactyls extinct once again.