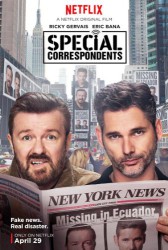 Storyline: A radio journalist and his technician get in over their heads when they hatch a scheme to fake their own kidnapping during a rebel uprising in South America and hide out in New York instead.