EMDB > All Movies > P > Paranormal Activity: The Marked Ones
Previous Next

Paranormal Activity: The Marked Ones (2014) 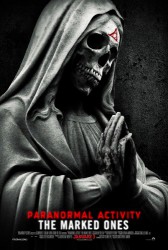 Storyline: Jesse begins experiencing a number of disturbing and unexplainable things after the death of his neighbor. As he investigates, it isn't long before Jesse finds he's been marked for possession by a malevolent demonic entity, and it's only a matter of time before he is completely under its control...