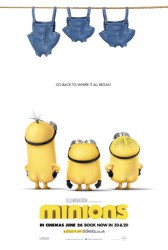 Storyline: Ever since the dawn of time, the Minions have lived to serve the most despicable of masters. From T. rex to Napoleon, the easily distracted tribe has helped the biggest and the baddest of villains. Now, join protective leader Kevin, teenage rebel Stuart and lovable little Bob on a global road trip where they'll earn a shot to work for a new boss-the world's first female super-villain-and try to save all of Minionkind...from annihilation.