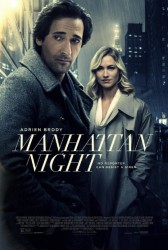 Storyline: Based on Colin Harrison's acclaimed novel Manhattan Nocturne (a New York Times Notable Book of the Year), MANHATTAN NIGHT tells the story of Porter Wren (Adrien Brody), a New York City tabloid writer with an appetite for scandal. On the beat he sells murder, tragedy and anything that passes for the truth. At home he is a model family man, devoted to his loving wife (Jennifer Beals). But when a seductive stranger (Yvonne Strahovski) asks him to dig into the unsolved murder of her filmmaker husband Simon (Campbell Scott), he can't resist. In this modern version of a classic film noir, we follow Porter as he is drawn into a very nasty case of sexual obsession and blackmail - one that threatens his job, his marriage, and his life. MANHATTAN NIGHT will be released by Lionsgate Premiere in theaters and On Demand May 20, 2016. Lionsgate Premiere, Grindstone Entertainment Group and 13 Films present in association with Sparkle Roll Media Corporation and Big Indie Pictures a production of Fable...