EMDB > All Movies > H > He Never Died
Previous Next 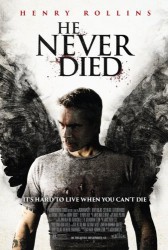 Storyline: Jack's in a rut. Depression and severe anti-social behavior has whittled down his existence to sleeping and watching television. He spends his days in a diner, playing church bingo and sleeping. When some hired thugs show up Jack's life is stirred up and the question of his existence comes to light.