EMDB > All Movies > H > Hana and Alice
Previous Next 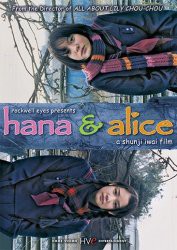 Storyline: Upon entering high school, two best friends named Hana and Alice notice a boy a year older them while waiting for the train, and they both develop a pretty strong crush on him. One day while secretly following him home, Hana witnesses the boy walk right into a wall and pass out. When he wakes up, she lies and convinces him that he must have amnesia, because he doesn't remember the fact that she was his girlfriend. After this, hilarity ensues as the two girls attempt to run with the lie. Of course, complications soon arise.