EMDB > All Movies > D > Death Wish V: The Face of Death
Previous Next 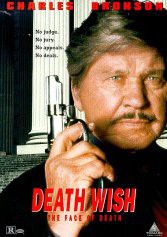 Storyline: New York's garment district has turns into Dodge City when mobster Tommy O'Shea muscles in on the fashion trade of his ex-wife Olivia Regent. Olivia is engaged to Paul Kersey, who provides a sense of security for herself and her daughter Chelsea. Olivia isn't impressed when Tommy tortures her manager, Big Al, so Tommy hires an enforcer named Freddie Flakes, who is a master of disguise. Freddie dons women's clothing to follow Olivia into a ladies' room, where he smashes her face into a mirror, causing permanent disfigurement. In the offices of D.A. Tony Hoyle and his associate Hector Vasquez, Paul and Olivia vow to see to it that Tommy is prosecuted. Later, Freddie and two of his men disguise themselves as cops, infiltrate Olivia's apartment, and shoot Olivia dead. Now Kersey is ready to take things into his own hands. Kersey follows Tommy's thug Chickie Paconi to the Paconi family bistro, where Kersey kills Chickie by lacing his cannelloni with cyanide. Next, Paul tricks Freddie out ...