EMDB > All Movies > C > Cold in July
Previous Next 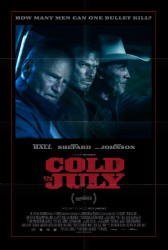 Storyline: In 1989, in the east of Texas, Ann Dane overhears a noise during the night and awakes her husband Richard Dane. He picks up his gun and stumbles with a burglar in the living room and accidentally shoots and kills the intruder. He is identified by the police as the wanted criminal Freddy Russell, but Richard is affected by the incident. Richard goes to the cemetery to see Freddy's burial and his father Ben Russell, who is also a criminal on parole, talks to Richard and asks for his son. Richard brings his son from the school and meets his wife at the police station, but the police inspector Ray Price cannot do anything to help him. Soon Richard finds that someone has broken in his house and the police officers stake out the place. However Ben breaks in the house but escapes. Ray calls Richard to tell him that Ben was arrested in Mexico and the case is closed. While leaving the station, he sees a picture of Freddy Russell and he realizes that he is not the burglar. Richard ...